Wherever social tagging is supported as an optional feature, its use obeys a power law. Some people use tags consistently, some sporadically, most never. This chart of Hypothesis usage illustrates the familiar long-tail distribution:

Those of us in the small minority of consistent taggers care a lot about the tag namespaces we’re creating. We tag in order to classify resources, we want to be able to classify them consistently, but we also want to morph our tag namespaces to reflect our own changing intuitions about how to classify and also to adapt to evolving social conventions. 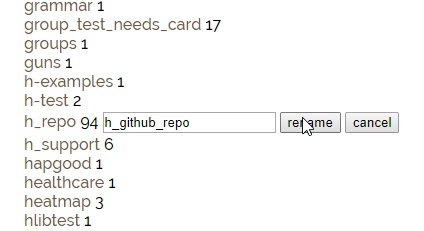 Consistent tagging requires a way to make, use, and perhaps share a list of controlled tags, and that’s a topic for another post. Morphing tag namespaces to satisfy personal needs, or adapt to social conventions, requires the ability to rename tags, and that’s the focus of this post.

There’s nothing new about the underlying principles. When I first got into social tagging, with del.icio.us back in the day, I made a screencast to show how I was using del.icio.us’ tag renaming feature to reorganize my own classification system, and to evolve it in response to community tag usage. The screencast argues that social taggers form a language community in which metadata vocabularies can evolve in the same way natural languages do.

Over the years I’ve built tag renamers for other systems, and now I’ve made one for Hypothesis as shown in this 90-second demo. If you’re among the minority who want to manage your tags in this way, you’re welcome to use the tool, here’s the link. But please proceed with care. When you reorganize a tag namespace, it’s possible to wind up on the wrong end of the arrow of entropy!